The prefatory adoration melody over, 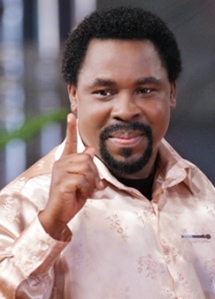 Prophet T.B. Joshua mounted the altar to minister to the congregation. He assured the assembly that God was with them and that they should be in the attitude of prayer as the message for the service was being delivered, reminding them that the message would deliver them. Soon after, Wise Man Daniel took over the baton to deliver the message. In the same fervour as the prophet, Wise Man Daniel evoked ebullience in the Church, in the presence of the Lord.

In the words of the Wise Man, the Bible makes us understand that the name, Jesus Christ has authority and power among those committed to His glory.

Christ’s duty is to raise us from death and restore the wholeness and fellowship between God and man. Power comes through the Holy Spirit to those who accept Jesus. In His name you can! A Christian, according to the Wise Man, should depend entirely on the power of Christ, if he must overcome satan. Citing Mark 16:15-20, the Wise Man told the Church that the name, Jesus can drive out demons and poison will not have the power to harm believers. Those who depend solely on God’s power show the evidence of this power in them. They are also the people who can move mountains in His name. Citing Mark 16:17, he said the text advises us to kick the devil out of our lives and the lives of others. Ephesians 1:21 says Christ has dominion over all powers and authorities on earth and in Heaven. In His name you can make wonderful things happen!

Mounting the altar once more, Prophet T.B. Joshua cited Matthew 9:18-32, where a man who could not talk was brought to Jesus and He cast out the demon (rather than heal the man) and the man spoke. The prophet remarked that there is the spirit of bondage which causes affliction. The sin of the soul is the cause of sickness, poverty and other problems and when you are delivered, you are free and blessed and this is why, he said, everybody needs deliverance. If one is healed without the spirit being delivered, the healing is only momentary as the spirit will cause a relapse of the ailment. To be blessed effectually, you need deliverance because there is a spirit of bondage from which you need deliverance. Deliverance is taking one from the dark kingdom to light. It is making one a channel of light where there is darkness. When your sins are forgiven, you are delivered.

TESTIMONIES RESTORED
The prophet looked in retrospect at the major events of the previous Sunday service and remarked that man treats but God heals. One of those who received their miraculous healing was,

Mr Isiaka Sadik Fache, an ulcer patient from Okene, Kogi State. He got not merely a healing but also a replacement of his tibia. The leg in question (right leg) sustained a fracture and was rotten to the bone as a result of the ulcer that became chronic in defiance of treatment in both hospitals and traditional medical homes for two years. At a stage in the hospital, iron was fixed in the leg but it never gave the relief much sought after. Consequently, both the hospital authorities and his relations considered amputation as wise and inevitable.

Fache, however resisted the idea, being used to the miracles relayed on Emmanuel TV. Much against the advice of his people, Fache came to The Synagogue and he was arranged on the prayer line. As soon as the prophet stretched his hand at him and declared him free on the prayer line, the excruciating pain which propelled the ulcer disappeared. He went home and watched the gradual healing of the leg. As he was having a bath at home, he saw that some bone in the affected area fell off. He became afraid that that might be another problem to contend with. Contrary to his fears however, the Lord was doing something about his effectual healing. The Lord was supplying a spare part to replace the damaged bone and in truth, Mr Fache became healed with a new bone. Mr Fache displayed the damaged and rejected bone on a sheet of newspaper as he told his story to the congregation that listened with rapt attention. Today, Mr Fache can contest in a game of 100 metres with anybody!

The next testimony came from a couple whose male partner received a prophecy in the Church that the wife, like her own mother, had the spirit of lust and that it was a generational curse. As the prophecy was being issued, the man called his wife, Adeola whom the prophecy referred to. On her way to meet her husband in response to the call, she was enmeshed in a web of spiritual frenzy, declaring herself a queen. She told the prophet that she was a queen of the river and that her husband was her wife much to the consternation of all. She vowed never to recognise the authority of her husband as she was a queen.

This satanic assertion apparently sent cold shivers down the spine of the husband and the man of God had cause to tell him not to be afraid. Reeling on the floor in the frenzy of the manifestation, she displayed uncanny bravado in utterances and unwillingness to relent. On his part, the husband voiced his refusal to continue with the relationship as he had contracted a new relationship with another lady, who incidentally was present in the Church at the time. The husband accused Adeola of infidelity both outside the matrimonial home and even defiling the marital bed when he travelled. On account of her marital malfeasance, the husband decided to abort the marriage.

The prophet however, advised him to reconsider his decision because the Adeola who misbehaved as a mermaid in the past was quite different from the delivered Adeola who had become an epitome of love and care for him and the children. He added that the new relationship with the other woman should be discontinued even though it had advanced almost too far to contemplate that idea.  The man of God assured the new lady, whom he never allowed to come out, that he would point her way to success and more marital bliss than she could ever get from the present man. On that note, Adeola and her husband were delivered from a marriage of insolence, insubordination and infidelity to the much desired spate of conjugal bliss in a capsule propelled by the trio of prophecy, deliverance and reconciliation.

Picking a strand from the web of interlocking factors for broken homes, the prophet asserted that demons are the causes of broken homes. Accusing individual members of the family of wrongdoing, does not hit the root of the problem. According to him, families should be reconciled and put on the right course. It was the demonic spirit in Adeola that committed the crime and so the person of Adeola should not be punished. Jesus came to restore the relationship and fellowship between God and man.

Mr and Mrs Paul Udeh gave a startling testimony about The Anointing Water. According to Paul, his case differed from that of others who had low sperm count. In his own case, there was no sperm cell in his semen. That was the reason the couple remained barren for twelve years as no hospital or traditional medicine could provide a solution. He, wise enough, came for The Anointing Water and got one which they applied and soon after, his wife, Nicky became pregnant and bore him a son. By that, he became happy as his penis was no more for urinating alone but also for procreation.

They named their miracle son, Treasure. His wife, he added, nursed the pregnancy for nine months without complications. At the time of the testimony, Treasure was only ten months but Nicky was already pregnant again. The bitterness which plagued the family for twelve years has turned to joy, thanks to The Anointing Water. In her testimony, Nicky told the assembly how people had spoken to her in the shadows to void the marriage as she would not bear children. Her patience and prayers have paid off, thanks to The Anointing Water.

The family of Folunrosho Olugbenga also came out to give their

Mrs Ann Nwaobi was the next to give her testimony.

In her words, she had been married for four years but had had no child because of fibroid. When she got The Anointing Water and applied it as directed, she experienced an unusual flow of the menstrual blood that very month. When she went for test after the menstrual flow, the fibroid had disappeared. She thanked God for the miracle she got through The Anointing Water.

Miss Powerfree Andrew from Cameroon also came to testify to the power of The Anointing Water. She, once a brilliant student, began to wane in academic performance. In one of her examinations, she passed only two courses out of the twelve that she wrote. It was certainly a big issue that needed attention. So, she came to The SCOAN to collect The Anointing Water to remedy the situation. As soon as she applied The Anointing Water as instructed, she noticed a positive change in her memory power. Consequent on her improved academic performance, she got admission in London School of Commerce and also a scholarship thus reaping prosperity from the Prosperity Anointing Water she collected in April.

In course of t

ce, the prophet, in a vision, saw a man who hid a gun in the Church premises. He called the young man out and he led the prophet to where he had hidden the gun. The prophet recovered the gun and asked the Church to watch out for the man and his mission in the following Sunday’s service adding that the recovered gun would be handed over to the police.

The service ended on a happy note as all participants were assured of total deliverance from the hands of satan and its agents.