Most people have heard about it; some have even had an encounter with it. It’s something that has been happening to so many people yet seldom talked about. But on Sunday, 8th August, it was time for it to be exposed. The viewers of Emmanuel TV and many of the congregants at the SCOAN watched and listened in shock as one of the enemy’s strategies to destroy was exposed by T.B. Joshua at The Synagogue, Church Of All nations during the Sunday service…

It has been long known that “our enemies are advancing in their own pace of technology”. The internet is just one such method they have been using to infiltrate the hearts and minds of people and this has resulted in negative consequences. T.B. Joshua clearly highlighted the fact that it’s not the internet that is bad but the misuse of it.

Mrs Seyi Awujoola – a woman who was a victim of such misuse – came forward together with her husband. The previous week, she had been identified through a prophecy given by T.B. Joshua. He had prophesied that there was a married woman in the congregation who was in between decisions. That she was dating a man she had met through the internet. He said that this had caused trouble in her marital home and that the love she had for this ‘internet man’ was more than that she had for her husband. Immediately, Mrs Seyi Awujoola jumped out from among the congregation in response to the prophecy, exclaiming, “I’m the one! I met this man on the internet…” Explaining her case, the man of God said, “The love of the man has taken eighty per cent of the love of her heart and her husband, twenty per cent”. That Sunday, the man of God delivered Mrs Awujoola from the strange spiritual tie which had almost wrecked her marriage and she was back with her husband a week later. T.B. Joshua asked her, “Are you still having affection for the man?” to which she replied in the negative. A smiling Mrs Awujoola said, “I give thanks to God because since the deliverance, the love has come back for my husband. Before, I hated him so much.” Reconciled to her husband after her internet affair, she was in the best position to give advice. She advised other couples to stick to their spouses and “to take your husband/wife as your internet”. Mrs Awujoola then grabbed her husband by the arm and they walked arm in arm like newly weds back to their seats as the congregation clapped, many smiling in admiration.

Mr John Oyadongha from Bayelsa state also came forward during the church service with his wife to give his own experience of a ‘computer affair’. “I met a demon. I bought a phone that contains music. I slot it into my laptop. Each track was Indian music. My wife said that she didn’t like the music and that I should do away with it. Unknown to me, the music was demonic. This music led to my being sacked in my company. I started seeing an Indian woman in my dreams, singing the song, dancing and seducing me. She was dressed in a blue light gown (transparent). She was doing an Indian [type] seductive dance. All this began as I browsed through the internet listening to this music. In my dream, the woman would dance.” Mr Oyadongha, to the amusement of the crowd said, “I don’t understand the Indian language but let me sing a little bit of it”. He then proceeded to sing the Indian song as he had remembered it and there was an uproar of laughter in the congregation. “My case is similar to the woman who had an affair on the internet” he said. “She started singing this song, dancing, seducing me at night when I wanted to pray. In the dream, a demon threatened me that my wife would never get pregnant.” Mr Oyadongha then shouted, “Man of God, please deliver me!” 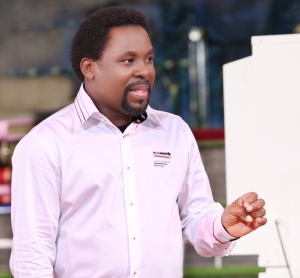 T.B. Joshua assured him that, “My brother, as you are saying it now, you are delivered.” A thrilled Mr Oyadongha exclaimed a big, “Amen!” He and his wife then waved their hands in thanksgiving to God.

Knowing the extent of the damage the misuse of the internet has had on people’s lives and marriages, the man of God, gave an invitation to anyone amongst the congregation who had such experiences or similar cases through using the internet that they should come forward. In a plea, he said, “Those who have similar cases, don’t hide it, come out.” A delivered Mr Oyadongha stood with his mouth agape at the tremendous response of the congregation. Surprisingly, 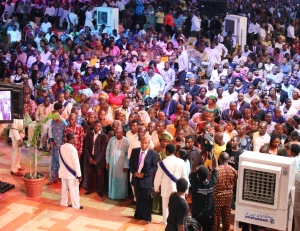 hundreds came forward towards the altar in response to the man of God’s invitation.

One of the men that came forward admitted to having an internet affair. He said “Anytime I sleep, I would see a python. Before I knew it, I would l have a wet dream. It always happens when I have a serious appointment. I would have a wet dream and everything would just vanish.” Rita Odaba – a lady who also came forward – said that she met a guy from the internet who would ask her to remove her clothes so that they could have sex. “If I said no, I would turn off the computer.” She then explained that an evil spirit would enter her and she would find herself removing her clothes (in the physical). After that, someone would then come in the dream to make love with her.
Another lady Mrs Chioma met a friend on Yahoo. She exchanged numbers with the Indian man on the internet. “He used to call me and ask me, Are you naked? Are you sleeping? What are you wearing? He would then tell me we should make love on the phone.” This internet man would ask that after she satisfied herself and released, that she should clean herself with a handkerchief and post the handkerchief containing the discharge to him.

Another woman confessed to having a ‘lesbian internet affair’. She met a woman on the internet. Initially they were just friends on face book. Late in the night, she would call her that she wanted to make love to her. Both of them would undress. She said that this had been her problem and that she was unable to stop it. The man of God interjected, “There are millions of people – their lives are destroyed. They have husbands through the internet.” But rather than condemning the internet, he was quick to educate the congregation that “The internet is a supernatural ability from God. It’s a gift” but cautioned them against the mismanagement of it.
As well as exposing the enemy’s tactics, it was a big lesson to all and a relief to the victims that came forward that deliverance was available in the name of Jesus Christ through His servant, T.B. Joshua. 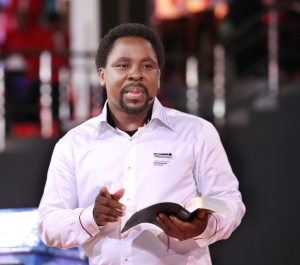 Noting the problems many are experiencing, he asked the question, “How many believers, because the Word does not prevail in them, live as common men?” Giving them time to reflect on the question, he addressed it, “You begin to live as a common man when you begin to confess your testimony of need. If you are a Christian, no matter the situation you are in, leave it for God, He is in charge, He is aware. Remember as a Christian, the word you speak determines the life you enjoy, the word you speak creates a blessing or curse. I’m a child of God, defeat and failure, are things of the past, I’m born again.”
The message was clear – the answer to your problem is in God’s Word. “The Word is God speaking to you. The Word is always now. Begin to confess it now, act it now, receive it now. The Word of God is always now. It is not on the written page but His Word is in the lips of the believer. The Words of God become a living thing in the lips of believers.”

A memorable event was that of a stiff opposition met by one of the Wise men at the prayer line. A woman whom he prayed for began to exhibit strange behaviour when the evil spirit within her began to manifest. As the Wise man was casting out the demon in her, using the name of Jesus Christ, she paced up and down and the demon in her voiced out that he refused to go.

It was a tough spiritual battle – a deliverance of the ‘highest order’ which lasted for about ten minutes and had the congregation and viewers’ eyes fixed on their screens. It was more entertaining than the best action movie – the only difference was that this was real. Hearts raced as the woman had a face to face confrontation with the Wise man and geared up to attack him in a fighting posture. Unrelenting and using the authority he possessed in the name of Jesus Christ,

the Wise man called on the fire of the Holy Ghost to descend on her. “Holy Ghost fire, in the name of Jesus Christ!” At that point it was clear that the woman began to feel more than just uneasy; she was experiencing some form of fire and began patting out the invisible flames. 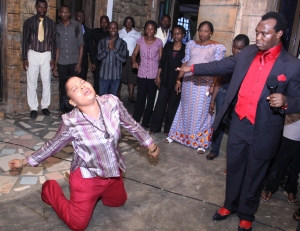 The heat was on and the battle came to a pinnacle when the evil spirit finally relented and the woman ended up on the floor, declared free by the Wise man. 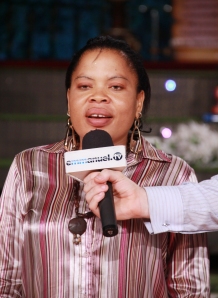 During the spectacular deliverance, the woman confessed the demon that had possessed her stating that she had the spirit of Lucifer. “I destroyed so many souls. I have destroyed so many people including my family relations.” She proceeded to mention the powers she possessed and that she had power in her private parts. “The power in me would destroy you. I use knife to destroy anyone who falls in love with me. I use blade to destroy people. I have cursed my husband with the power I have.” The battle being over, the woman is now free from the bondage of satan and said that she knew that through her deliverance her husband had also been set free.

22 thoughts on “AN INTERNET AFFAIR”