The remarkable testimony of Nigerian boxer King Davidson Emenogu, currently fourth in the world in his division ‘Super Welterweight’. To God be the glory!

Emenogu, who was at the church last Sunday to give testimony and thanksgiving over his recent success, said he had previously experienced a series of setbacks each time he had a major fight. According to him, whenever he was scheduled to fight, he would sustain an injury that would force him to withdraw. These recurrent injuries prompted his promoters to write him off, and also cast a great pall of doubt on his career. Emenogu became frustrated at a point. This was his situation until he came to The SCOAN to seek the assistance of the Man of God.

His encounter with SCOAN, he pointed out, began when he listened to a prayer on Emmanuel TV after which, he decided to pay a visit to the church. Soon after, he continued, he got a call from his manager informing him of a scheduled fight within thee weeks. By this time he said, he was still on holiday in Nigeria and felt it would be proper to see Prophet TB Joshua over this. He got a firm assurance from him that he would be victorious in the fight and even assisted him with some cash. 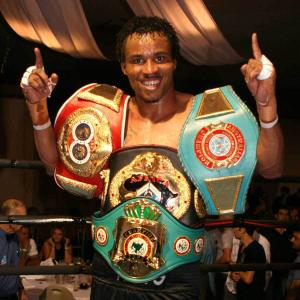 With God, all things are possible!

Emenogu said his victory is a confirmation that God answers prayers. He further said what he received from The SCOAN cannot be quantified in monetary terms. The fight was his first professional fight which he had only two weeks to prepare for. And back in Australia, his trainer was worried that he could easily be defeated, but he assured him that he had the support of God. Emenogu said that the use of anointed water from The SCOAN, energized him, so much that in the 12 round fight, he was never tired unlike before when he used to lose steam in just round 7.

On his part, Prophet TB Joshua said when Emenogu came to him, he foresaw a fight and decided to pray for him to win the fight. He pointed out that his prophetic vision also gave him the privilege to see his financial stress which prompted him to assist him with $2,000 dollars. Joshua promised that henceforth, he had taken him as his personal responsibility and will always pray for him to move from his current world ranking of number four to number one. That is the world champion.

Undefeated in his professional career

Joshua further explained that one other factor that guaranteed victory for Emenogu, was his personal faith in God and the veracity of prayers. He revealed that he asked the boxer to call him 30 minutes to the fight which he did. When he called, Prophet Joshua simply asked him to pray and he (Joshua) would seal it with Amen. This he did, and is a demonstration of his faith.