Since Favour’s story was shown live on Emmanuel TV, there has been a deluge of responses from viewers accross the world, touched by the tragic story of a little girl wrongfully accused of witchcraft despite her brilliance and innocence, and her subseqent vindication by Pastor TB Joshua. The story continues to generate enormous interest, such that Africa News reported it…

To many, Friday 28th August 2009 was just another day, another event, another occurrence in the cycle of life, quickly to be forgotten. But to 10-year-old Favour Onyenwaku of Abia state, Nigeria – it was so much more than that.

This day marked the end of years of wincing from the repeated blows of false accusations, slander, rejection and isolation. She had fallen victim to the cruel, relentless grip of society and cultural tradition. She had become the prey of a predator as destructive as dynamite and as deceptive as the devil. She found herself caught up in a horrible web of trickery and mockery through no fault of her own. The way out seemed so remote and inaccessible.

Calling the nature of God the nature of satan is never to be undertaken lightly, assumed or presumed. Sadly, many tend to do so, not even beginning to contemplate the heavy repercussions suffered thereof. It is such assumption as this that is often the cause of the stumbling blocks, limitations and banes of so many families and communities.

After being labeled a witch, Favour found herself hearing things she was not supposed to hear, seeing things she was not supposed to see and experiencing what was far beyond her tender years. On taking her to the church, the pastor had labeled her a witch, possessed by evil spirits. It was stated that she could not be delivered because she was a witch from birth, responsible for the death of her mother (who passed away just 8 days after she was born). She was said to be the one hindering the progress in the church, attacking people both day and night. The pastor had advised her family to send her away to the village. Her brother asked the pastor, “If I send her away, she will die”. The pastor responded by saying, ‘It is better for her to die than to kill you and your whole family. She should go. If she’s going to die, let her die.’ 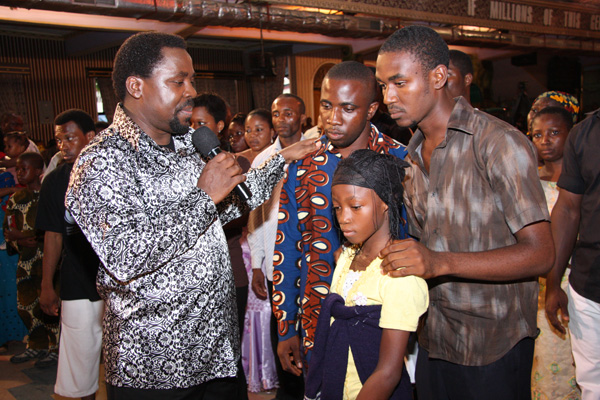 All we need is His mercy and favour!

Everywhere she went, both at home, in school and in church, Favour was rejected and humiliated pursued by a deluge of name calling, slanderous remarks and accusations. She walked alone, often crying bitterly, bearing the stigma of a name she was never meant to bear. What made the pain more intense was that it was not only strangers who labeled her what she was not but also those closest to her, her blood.

She was not allowed to enter the church or other public places. Desperate, her family took her out of school for a period as they took her to various places for deliverance. She returned to school, one week prior to the exams, took the exams and also took first position and was given double promotion. To many, this achievement served not as testimony to her innocence but rather as a proof of her guilt. They judged that she was using her witchcraft powers to attain that success.

Perplexed and bemused by the crisis in the family and in a desperate attempt to confirm the truth of the matter, her uncle Edward Jonathan and cousin, Amadi Kelechi brought her to TB Joshua for deliverance. It was the monthly healing and deliverance service on Friday 28th August 2009. Her brother and cousin cried out, desiring for TB Joshua to hear their case. He took time to listen carefully and then asked Favour: “How do you feel when people call you a witch?” She responded: “I feel like crying because I don’t know what is a witch”.

After hearing the story of the two brothers, TB Joshua declared that Favour was not a witch. He said: “You can say what you like but as for me and my family and my household, Favour is not a witch. If your family rejects Favour, the kingdom of God is for her. How can you turn Favour of God to witch?”

Favour clearly elated was told to advise the whole world. She said: “I am happy because I’m not a witch. If people call you witch, you should just accept it and say yes. And one day, God will fight for you. If you do not agree with them will beat you chase you away or kill you.”

Her intelligence and potential was evident for all to see and T.B. Joshua vowed to help her further her education and join the family. He said: “If gold must be gold, it must pass through the furnace. You will pass through intimidation, hatred, persecution – you are a promised child.”

The darkness has ended and the light has truly dawned in the life of Favour and her family. Hope which had been snuffed out has been rekindled and will soon be burning bright. The vanquished has indeed been vindicated. She had been the target of a scheme, crafty and clever, bent on crushing her potential and causing crisis in her family. But that plan was foiled as she found out what Almighty God, her Creator and Saviour had to say about her situation.

One can begin to imagine, years on when Favour has grown up and become an influential figure in the society, how grateful she will be. Saving a life and restoring a soul is indeed far more precious than any other achievement or accomplishment in this world.

3 thoughts on “Favour’s Story… God’s Favour! Only On Emmanuel TV”